You will find local information, information about Kirkoswald's entry into Royal Horticultural Society Cumbria in Bloom Competition and the National Britain in Bloom competition.

There is also information about Kirkoswald Parish Council and Kirkoswald Environmental Group.

Kirkoswald means the Church (Kirk) of Saint Oswald. Kirkoswald is about nine miles to the North East of Penrith. It is a small but vibrant village in the Eden Valley. The River Eden runs north from south of Kirkby Stephen to eventually join the Solway Firth.The valley is crisscrossed by a number of smaller roads as well as the M6, the A6 and the Carlisle to Settle Railway.

The village is approached by a narrow road that crosses the Eden by way of an impressive Georgian sandstone bridge.Traffic lights have been installed in recent years as a response to local concerns. The road sweeps up from the river passing the church and the College with its imposing gateway and walls.

The village itself is built up a quite steep hill with houses lining the roads to Brampton and Armathwaite. A lot of the older buildings are based around a cobbled square. K’o, as it is known locally, used to be a very important market town holding regular hiring fairs. It has the remains of Kirkoswald Castle and the term College refers to the training of priests. The importance of K’o declined after the railway came to neighbouring Lazonby. The Raven Beck flows through the village and gives its name to roads, houses, and the community magazine.

Many thanks to our sponsors

Kirkoswald Environmental Group members are local people who have an interest in conserving and protecting the environment in and around Kirkoswald.

We have been recognised by Cumbria County Council, Cumbria Waste Management Environment Trust, Eden District Council and Kirkoswald Parish Council. We have worked with all four and successfully bid for funding from all four.

Date and time of the next meeting:

To be determined, usually held at the Crown Inn Crown Inn, Kirkoswald

A walk from London to Glasgow started on September 5th 2021. The walk is for everybody and is arranged in relatively short stages which can be accessed by public transport by those who wish to join for part of it.

What is COP 26 and what does COP stand for?

COP stands for Conference of the Parties, and will be attended by countries that signed the United Nations Framework Convention on Climate Change (UNFCCC) - a treaty agreed in 1994. The 2021 meeting in Glasgow will be the 26th meeting, which is where the 26 comes in.

Why is COP26 so important?

US climate envoy John Kerry describes the climate summit as "the last best chance" to avert the worst environmental consequences for the world.

Kirkoswald hosted the walkers overnight on October 8th in the Church Institute. The original plan was to camp but the dreadful recent weather has made it difficult for the walkers to get dry and warm. A "come and meet" session was held. Music, dance, and group discussions were held. Several villagers attended, Sue and I found the evening enlightening, interesting, and very encouraging. People of all ages and from many places were walking, I met ones from Stockholm, an Australian as well as people from London, Cambridge, the Midlands, and Lancashire. There were lots of young people walking as well as other age groups.

The group has not heard much news since setting off so I was able to tell them about the news this week of the award of the Nobel prize for Physics. It was shared by three scientists. Back in the 1960s, two had created computer models that accurately predicted Climate Change. This was remarkable because back then there were few computers, they were huge and had little power compared to those today. Computer modeling, commonplace today, changing variables in a situation and calculating what might happen, was unheard of back them. Most important, they accurately predicted the close-to-disaster situation we are in now. They proved that Climate Change is a scientific fact and can be understood through Physics. 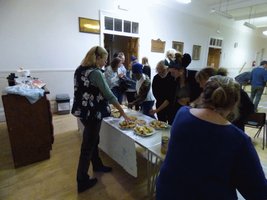 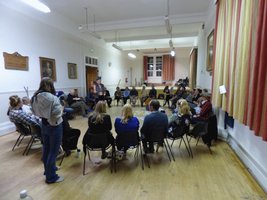 "For an exceptional effort in 2020, keeping our environment in good heart and an inspiration to others"

I would say - "Not bad, winning an award when there was no competition".

Videos have been moved to the KEG publications page. Click here to see them

We are linking up with Fellfoot Forward to share ideas, expertise and resources

Led by the North Pennines AONB Partnership, the Fellfoot Forward Landscape Partnership Scheme is a major project to conserve, enhance and celebrate the natural and cultural heritage of a special part of the North West of England. Developed with local communities and organisations, the scheme was awarded funding from the National Lottery Heritage Fund in 2020 and will run until 2024.

The Fellfoot landscape stretches from the Cumbrian fellside of the North Pennines AONB and UNESCO Global Geopark to the River Eden, and runs north from Melmerby to Hallbankgate. A landscape with 8000 years of human stories and home to wildlife scarce throughout the rest of the UK. Farming practices, many generations old, are responsible for protecting our soils, mitigating flood risks, and protecting heritage features.

We hope the scheme will provide a huge boost for the area. Our work will allow greater access to restored heritage sites and promote a deep understanding of the Fellfoot landscape’s special cultural history. Working with partners and local communities, we aim to strengthen the visitor economy, providing a better future for residents and businesses. Our projects are exciting and varied, and we hope there is something for everyone to get involved in.

Cumbria in Bloom and our entry into the RHS National Britain in Bloom are postponed for one year for obvious reasons.

Everyone seems to be enjoying the good weather and lots are gardening. I know our allotment and garden are further on and tidier than ever before at this early in the season.

Remember that Cabinet Secretary Michael Gove said that it was not just allowed but people are encouraged to take exercise on their allotments. In the months to come really fresh organically grown vegetables with lots of fresh flavour, great nutrients and vitamins will play a part in improving our general heath and disease resistance.

If you have not tried at home before why not try growing a few vegetables at home. Discount stores sell both food, DiY and gardening stuff so you can still buy seeds and compost. potatoes can be grown in containers or even compost bags. Look on the Internet for helpful tips on techniques. If you cannot buy seed potatoes (a bit late in the season now) try putting some nbought spuds on a window bottom. They should chit because of the time of year. When sprouts are 1cm long you can plant them.

Gardening and growing things are great forms of exercise and also great for mental well being. Whilst you are gardening you are thinking about what you are doing and not worrying about other things

I hope this year that Kirkoswald looks even better than the five years when we were awarded Gold by Cumbria in Bloom. It does not matter if there was no judging this year. That decision is to keep us and the judges safe. The real reason for entering the competition is to take pride in our wonderful village, its wonderful community and all enjoy looking at and taking about how beautiful it is.

Kirkoswald does indeed look great again this year. Well done everyone. I think everyone has enjoyed the outdoors and gardening this year. The allotments were a safe place to work, take exercise, grow wonderful organic tasty food and meet and chat to people at a safe distance. We are all very very lucky to live where we do. People are sensible, safe, considerate and kind to each other. community spirit is alive and well here.

Things have opened up but we are still being careful. Gardening and small work parties have opereated safely. We await the results of our entry into the Cumbria in Bloom competition. Kirkoswald looks good despite all of the problems we have encountered during 2020 - 2021