We have been entering the Cumbria in Bloom competition since 2010. Face to face judging returned again this year. Two experienced judges brought a trainee judge and used the opportunity to use our efforts to explain to the new judge how to assess us by matching what she saw to the criteria set by the RHS. They took great interest in everything and spoke to many villagers about their horticultural and environmental efforts within the village. In the RHS in Bloom competitions, the village is judged rather than the Parish as a whole. They stayed for longer than is usually the case and we think they enjoyed the experience. The awards ceremony will be held on 19th October so we do not have long to wait to find out.

Cumbria in Bloom and Britain in Bloom postponed for one year. We ran a garden competition involving the whole Parish. This was done using photography and e-mail to "hand in" photos. Judging was electronic too, no "social distancing" required.

We also ran our photography competition again and winners will appear in the 2021 Kirkoswald Calendar.

Winning entrants can be viewed by clicking Photogallery here

We are delighted to announce the winners of the Kirkoswald garden competition as follows:

Thanks to all the entrants and to the judges for their hard work.

In addition the judges highly commended the gardens of: 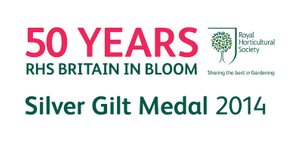 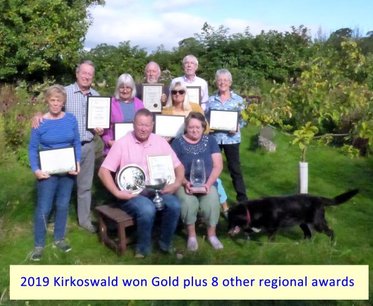 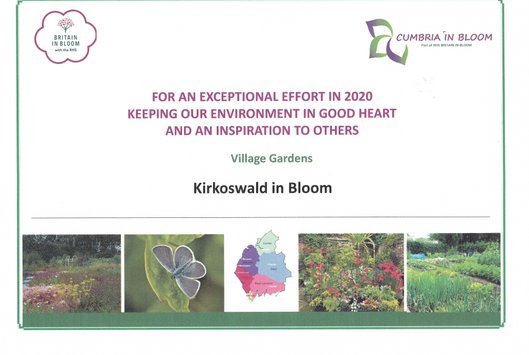 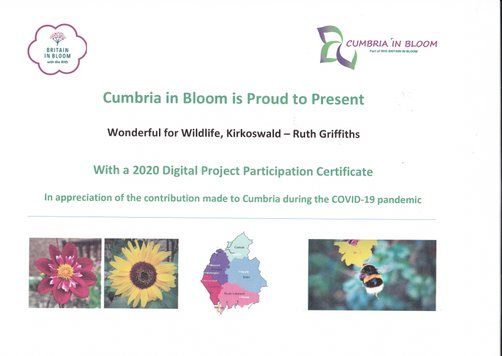 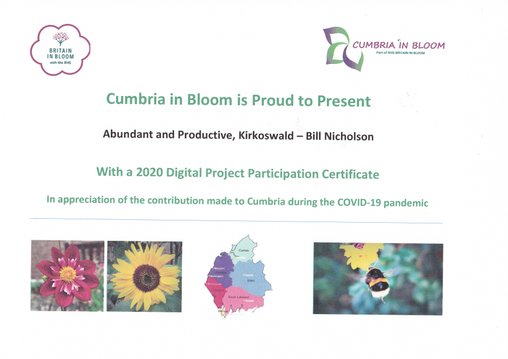 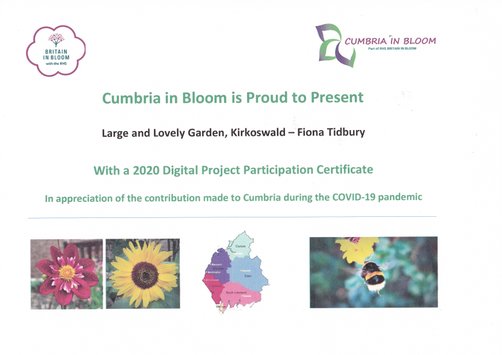 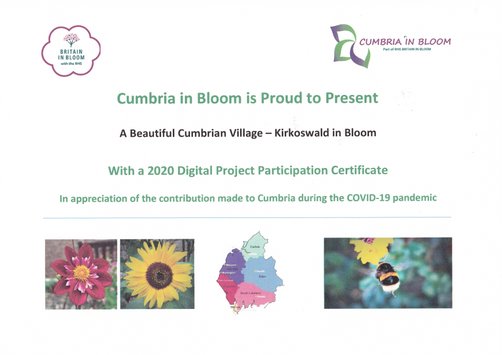 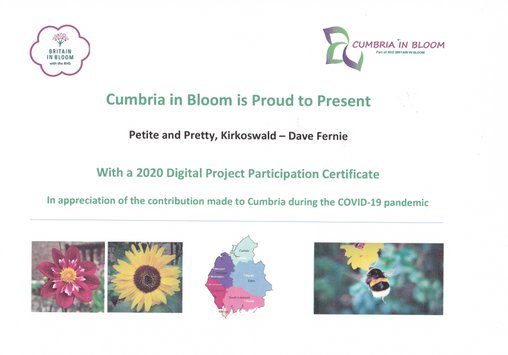 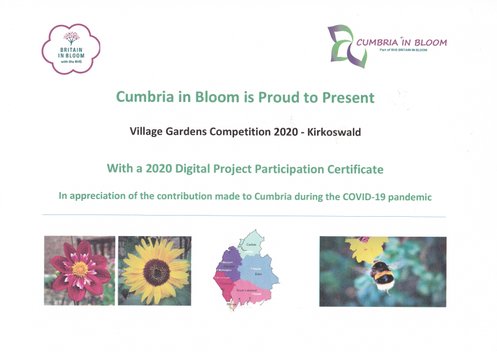 Information about Kirkoswald's entry into Royal Horticultural Society Cumbria in Bloom Competition and the Britain in Bloom competition.

2010 Our first entry into the Cumbria in Bloom competition after some years standing down. Royal Horticultural Society Silver Award.

2011 Kirkoswald  winners of the Eden District Council Trophy for "The Most Improved in Year" and a Silver Gilt Award.

2012 Runners up for Best Village with a Silver Gilt Award. Crown Inn and the Fetherston Arms jointly won The Lakeland Trophy: Best Commercial Premises in Cumbria.

2013 We won Best Village with two Gold Awards from RHS Cumbria in Bloom.

We were also runners up in another five categories:

Gold Award in the Village category

Runner up: Strikes, Houghton Hall Trophy for the Best Village Category with a Gold Award

Village volunteers cleared 65 bags of "daisy wheels" from Appleby Sewage works and other plastic debris from the hedges between K'o and the Bridge. We cleared trees, logs and other combustible flood deposited material. A wider litter pick in the village and on the approach roads to K'o collected 35 more bags of rubbish, that is 100 bags this year. Many thanks to Eden District Council for providing blue bags, litter picking equipment and then disposing of the waste.

This is the highest level achievable and done in just a couple of years. We scored 94/100. This year was the first time we entered the orchard for the competition. Very well done to everyone involved.

Congratulations to everyone who helped with litter picks, tidied before judging and spent time and effort making their own garden nice for everyone to enjoy. The village looks great. Well done.

Congratulations to everyone who helped with litter picks, tidied before judging and spent time and effort making their own garden nice for everyone to enjoy. The village looks great. Well done.

The award was Silver gilt  - and actually a high one at that.

We won the Friends of the Lake District Trophy for the best sustainable development (the orchard and wildlife area) and were awarded a Rose bowl.

The orchard and wildlife area also won an Outstanding award in the "It's Your Neighbourhood Awards".  We were actually given 99 marks out of 100. As a result we have been awarded a National Certificate of Distinction by the Royal Horticultural Society.

All in all an excellent result.  Well done to everyone and thank you for all your efforts.

The village did very well at the awards ceremony this year. The village overall was awarded a Gold Award and was the Best Village Overall.  The judges mentioned the pride and obvious care shown by villagers.

The judges particularly liked the orchard and wildlife area at the allotments awarding us a trophy for Greening Grey Britain and the award for the Most Sustainable Development in the county.  We were also awarded an Outstanding Award by the RHS It’s Your Neighbourhood scheme  and a Certificate of Merit from the RHS. They mentioned the Bee Corridor, which was awarded an Outstanding Certificate, and were impressed by the pollinator friendly planting by the wall under the Bell Tower, at the sport’s field and at the top of the allotments.  Our efforts on Millie Bank to preserve the biodiversity earned another Outstanding Award.

2019 Cumbria in Bloom Awards list: we won a Gold Award plus

This recognizes the efforts of a lot of people, the members of KEG and of the Allotment Orchard and Wildlife Area group but also of all those who look after gardens, tidy, weed, plant pots, litter pick and generally contribute to the beautiful village in which we are lucky to live.  Thank you for all of your efforts.

Cumbria in Bloom Awards 2020 - see top of this page